Twisted Oyster is an annual theme-based and socially conscious festival showcasing stories and works of human interest. At the core of the festival lies community engagement and social inclusion with a mission to place a spotlight on stories of human interest across a broad range of social issues, through the curation of films and time-based media artworks. 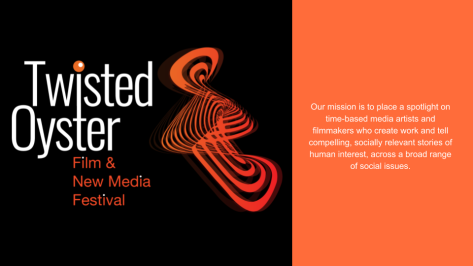 Twisted Oyster is a unique festival in Chicago where film and art intersect in a dual program exhibition.  The works created by culturally diverse artists and filmmakers from around the world open doors to stories that engage the public into an in-depth experience of human tales and narratives. Every year, the festival selects a number of works created with the use of advanced digital technologies or electronics to create provocative installations, while films are selected by a jury panel of artists, filmmakers and writers.

The festival’s dual program offers an opportunity to experience local and international short, feature, fiction, experimental, documentary films, and animation, plus a time-based art exhibition that includes small and large installations and performance for an immersive sensorial experience.

Pía Cruzalegui is a producer, artist and curator dedicated to creating spaces to show film, video and installation artworks from local and international artists. Her art practice includes time-based works, experimental photography and installation, and has exhibited in Peru, Los Angeles, Miami, New York, Chicago, Dubai and Paris. As a curator, Pía has orchestrated a number of exhibitions in Chicago and Miami, under the names UnLock Hause, and Kinetic Art Projects. Pía holds a graduate degree from the School of the Art Institute and has studied under the mentorship of Gregg Bordowitz, Matthew Buckingham, Carlos Llerena-Aguirre and Sergio Gomez. For further information visit her LinkedIn profile and herwebsite at www.piacruzaleguiart.com

Colin Smith is a journalist, musician, and communications specialist who works with artists, nonprofits, and publications. His days are often split between writing music features or reviews and implementing creative marketing strategies. He has managed marketing for arts non-profit Silk Road Rising, and he worked in a communications and editorial capacity for Illinois Humanities, Chicago Artists Coalition, The News Literacy Project, Newcity magazine, and more.

Carlos has represented Peru and the USA with his woodcuts in the Norsk Internasjonal Grafikk Biennale, Norway. The Jubilam X Internationale Grafik Triennale, Norway. Pacific States Biennial National Print Exhibition and The Xylon Graphische International Triennale, Switzerland. Recipient of the Frans Masareel Centrum artist in residence in Belgium and the Venice Printmaking Studio in Venice, Italy. His woodcuts are now part of the Library of Congress’ Permanent Collection.

Aundrea L. Frahm is a multimedia artist who is interested in forming transcendent experiences for her audience. Frahm received her Master of Fine Arts degree from the School of the Art Institute of Chicago where she studied performance, video, sound, and installation art. In her undergraduate she double majored with a Bachelor’s of Fine Arts in Studio Art and Art Education. Following her M.F.A., Frahm was appointed the position of part-time Professor of Art and Art Education at Brigham Young University in Utah for 3 years. She has exhibited nationally and internationally in over 40 exhibitions including several solo museum exhibitions. Her recent solo exhibition We Revolve Ceaseless, is currently being shown at the Museum of Art at Brigham Young University in Utah and will be on display until April 2018. Versatility is one of Frahm’s strong suits which is shown by her working as a visual designer for an immersive dance performance that sold out 50 shows, co-directed a modern dance company in Utah, presented at the National Art Education Association, and taught sculpture at the renowned Interlochen Center for the Arts. She is currently working and living in Las Vegas, Nevada. http://www.a-frahm.com/

Susan Krueger-Barber is a performance artist, painter, writer, tactical urbanist, community organizer, filmmaker, and teacher whose work has shown throughout the country. She has produced films that have played in various festivals such as Slamdance. She recently completed her MFA in Studio Art from the School of the Art Institute of Chicago. www.susankruegerbarber.com

Coral Pereda is a Spanish photographer and filmmaker who holds an MFA in Photography from the School of the Art Institute of Chicago, an MA in Photography and Design from Elisava School of Design and Engineering, Barcelona and a BA in Communication from IE University, Spain. She has exhibited and screened work at Galería Mitte, CC Las Arenas, Fundació Vila Casas in Barcelona, at the Nightingale Cinema, at Defibrillator, and Expo Art Fair, all in Chicago, Illinois and at SIA Gallery in New York City. Her pieces “Sexteto (Bad Girls Don’t Like Good Girls)” and “This is All You Need to Know” were part of the official selection at Twisted Oyster Film Festival at held the Zhou B. Art Center, Chicago, IL. In the light of that festival Coral led a video art workshop designed for middleschool children. Her work has been published by Vassar Review, the Present Tense Pamphlets edited by the Block Museum at Northwestern University and Peripheral Visions Art. I have been awarded residencies at Arquetopia Foundation Oaxaca, Vermont Studio Center, and La Wayaka Current.  Coral has worked for video essayist Kevin B. Lee and as a teaching assistant for the organization Changing Worlds. www.coralpereda.com

J Turk is a writer, artist, and a freelance curator based in Chicago. Their most recent curatorial project, Representation Matters: Conversations on Identity and Community, opened earlier this month at the Main Street Museum in White River Junction, Vermont. Prior to relocating to Chicago earlier this year, Josh was the Chair/Curator of Chandler Gallery in the Chandler Center for the Arts in Randolph, Vermont. Previous curatorial projects include: Salvage, Chandler Center for the Arts, Main Gallery, Randolph VT (2016), Sound & Fury, Chandler Center for the Arts, Main Gallery, Randolph VT (2015) and Art of Place, Chandler Center for the Arts, Main Gallery, Randolph VT (2015). In their writing, performance, and scholarship, Turk considers intersections of language and bodies, drawing from their research into modes of representation and figuration positioned within cinematic, literary and art historical narratives and informed by various theoretic frameworks including Composition, Queer and Trans Theory. Their “The Body Book” is housed within the Joan Flasch Artists’ Book Collection at the School of The Art Institute of Chicago. In their free time, Turk can be found lost in YouTube video threads and working through an ever-increasing Netflix Watchlist.

Sergio Gomez: Artist, owner and director of Art NXT Level Projects /33 Contemporary, director of exhibitions at Zhou B Art Center. Sergio is a Chicago based visual artist. He received a Master of Fine Arts degree from Northern Illinois University. As an art student, Sergio was recipient of the Lincoln Laureate Medallion Award given by the Lincoln Academy and former Governor of Illinois Mr. Jim Edgar. Sergio’s work has been subject of solo exhibitions in the United States, Italy and Vienna. He has participated in numerous solo and group exhibitions in US, Mexico, Italy, Vienna and Spain. His work can be found in private and public collections of the National Museum of Mexican Art, Brauer Art Museum, and the MIIT Museo Internazionale Italia Arte among others.

Dion Strowhorn is a Chicago based producer, founder and director of The Chi-Town Multicultural Film Festival and Totally Free Productions, LLC. Member of SAG-AFTRA, a recent Diverse Voices in Docs fellow in partnership with Kartemquin Films and the Community Film Workshop. Former co-founder of 9×18 Productions and the Midwest Christian & Inspirational Indie Film Festival.

Twisted Oyster 2018 at the Zhou B Art Center in Bridgeport